The Passions of Nicolas de Staël 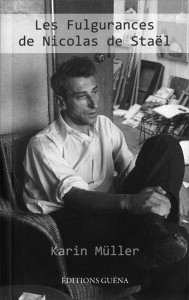 Written in the first person, this biography by Karin Müller immerses us in the life of one of the most uncompromising artists of the twentieth century. Born in Russia but soon forced to take refuge in Poland, Nicolas de Staël was eventually adopted by a family in Belgium, subsequently moving to Morocco and Italy before settling in France. Misunderstood by those around him, de Staël spent most of his life in poverty and suffering. Finally achieving recognition and financial security, he nonetheless jumped to his death at age 41.
Preface by Laurent Greilsamer, author of “Prince foudroyé” (Fayard)

Chapter 1 (beginning)
I was born in St Petersburg, Russia, in 1914. I’m the son of General de Staël von Holstein, Deputy Governor of the Peter and Paul Fortress. One of my ancestors married Germaine Necker, the famous Madame de Staël, daughter of Louis XVI’s Finance Minister. My father, Vladimir, is the last of a long line of chevaliers. He was a fifty-six-year-old widower when he married again, this time to my mother, Lubov, who was twenty years younger. The Orthodox church granted her a legally binding divorce;, she was rich, played the piano, sketched and drove a car – a very independent woman. Her cousin was the famous composer Alexander Glazunov, the family’s pride and joy.

My sister Marina was born a year after the marriage, then two years later, on 5 January 1914 according to the Gregorian calendar, I came into the world and, as befits a prince, I was baptised in the cathedral where the Tsars are buried.

But Russia under the Tsars is in its death throes; history is about to change radically. My sister Olga is born in 1916 and life at home still seems normal. We all run around barefoot, my mother reads Jean-Jacques Rousseau’s Emile, we commune with nature while bloody battles are being fought in every corner of the world. She paints in watercolour and teaches me how to hold a pencil to sketch. I like the scratching sound of the lead on the paper.

St Petersburg is re-named Petrograd. One final memory of my country: a man servant looks sadly at me and says: ‘Blednyi Malchik!’ ‘My poor, pale little boy’! What does he mean? That the world no longer belongs to me. I’ll never forget those words. Nor the smell of gunpowder, the din, the cries of the wounded, and my uncle Vania murdered in front of our house, for no reason at all.

Nicolas II died in a pool of blood: the end of the Romanovs. I was five when we made our escape from Russia to Poland. My mother took charge of a school for refugees but my father fell seriously ill. I was eight when he died. He was buried with military honours and I can see the open coffin. My last picture of him – a wax face on a pillow of flowers and that stone-cold hand… stone-cold… that we had to kiss.

Then my mother grows weaker. She does her best to maintain normality around her but the results of her tests are like a bombshell: a cancerous tumour in her left breast. Then the operation. Morphine. She goes into a deep, induced sleep. My sisters and I cling together to face the inevitable – laughter our best defence against tears. Our mother dies on 20 August 1922 aged forty-seven. So young! Marina, Olga and I are now orphans. Already I am too familiar with death. I am eight years old, I’ve lost  parents, home, motherland, my roots … everything. All I have left from my native Russia are my sisters, the only ones alive who remember our former happiness.

We take refuge in Uccle, in Belgium, at the home of Emmanuel and Charlotte Fricero. Their house is full of children. We are living in the expensive part of Brussels (like Neuilly in Paris)… An old butler in white gloves opens the door: “Who shall I say it is?”  Just as it was in the splendour we once knew in Russia… I like the house. The walls are covered from top to bottom with paintings, watercolours and drawings. It’s a little museum, a real paradise.

My adoptive mother is called Kolia, the Russian diminutive of Nicolas. I call her mummy. My little sister Olga and I turn into little savages, giving rein to all our pent-up feelings in this happy family environment. One day, Marina, our elder sister, catches us jumping up and down on the brand new green baize cloth on the billiard table. But I refuse to get off! I’m the boss! Everybody gives in to me. Maybe it’s because I’m a big ten-year old.

Every Thursday afternoon we attend the Russian school. We learn traditional songs and the history of our country. And of course, we speak Russian. On Sunday mornings we go to the Orthodox church where I just love the smell of the insensé. (Translated by Dr. Cynthia Gamble)